I’m taking a break from recounting my European adventures to share something I did recently. Last weekend, I went down to Dover , DE for the first time to attend the inaugural Firefly Music Festival. I was excited for a few reasons: it was my first music festival and some of my favorite artists happened to be performing, I was going to try camping for the first time, and , most importantly , IT WAS FREE.  Back it April , I was awoken by a call from Q102 telling me I had won two three-day passes to the festival. I didn’t remember even entering the contest but it was a welcome distraction from job hunting, final exams, and the general confusion that is my life. 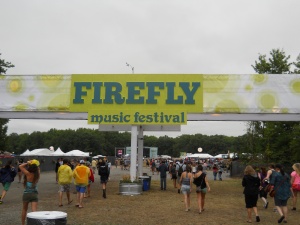 Getting to the Woodlands in Dover, DE was no easy feat (more on that later) but once there, things went smoothly. The staff, who was much more friendlier than I thought they would be, pointed us in the direction of the campsite. It only took us a little over an hour to put the tent together , which is amazing considering I’m a born and bred city girl and had never even been inside a tent before. 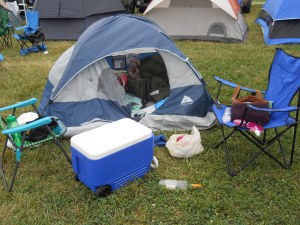 Our Campsite
Yup, I built that tent

It drizzled the whole weekend so there were a few times we came back to a damp tent or was woken up by raindrops falling on our faces. But after readjusting the tent’s covering (and a lot of duct tape) the problem was resolved after the first night. After that, it was quite lovely to hear the raindrops falling. We started each day and ended every night by sitting outside of the tent, talking with other campers, snacking, and enjoying being outside. It was a nice change from staring at a screen indoors.

There were so many bands and performers that made this festival worthwhile. A variety of genres like Pop, Rap, R&B, Electro were represented which gave me the chance to see some of my old favorites and meet some new ones. We camped out early for the performances we really wanted to see, like Lupe Fiasco and John Legend, and sat on the sidelinse for others. Some new loves I discovered are Kids These Days and Mayer Hawthorne.

For some reason, the festival shows felt more personal than concerts. Maybe it was just because it was so easy to get front row or maybe the artist fed off the vibe of the crowd and put some extra umpf in it. 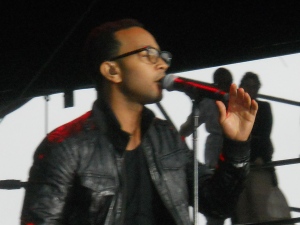 Speaking of the vibe, those three days the most relaxing and pressure free I’ve had in a while. People were friendly. Yes, even the sober ones. High fives from passerby were common as were smiles and small talk. The venue setup probably contributed much to the atmosphere. There was grass everywhere and when people got tired of standing or wanted a little nap, they would just lay down where they stood.  I enjoyed a couple of naps on the lawn myself and there are few things better than the smell of grass and the sun in your face.

The venue was also decorated nicely with twinkle lights that came to life after sunset and a hammock lounge complete with tree swings.

The Greyhound Trip From Hell

A lot of my college years were spent on a bus from New York City to Philadelphia. I learned early on , however , to never take Greyhound. In between the constant over booking, delays, and the general rudeness of the employees I really see no reason to travel with this company. Especially, when there are so many other cheap and polite options.  This time, it was the easiest and cheapest route and since my friend purchased the ticket, I decided to take the chance.

Big mistake. We almost missed our departing bus when an employee told us our bus wasn’t boarding, despite an earlier announcement that said otherwise and then failed to tell us she made a mistake and it was indeed boarding. Then, on the way home we had the misfortune to meet a shrilly voiced, curly haired employee who clearly hated her job. She shouted at people for putting their own bags in the bus but seemed to wonder off during boarding. She also made a habit of loudly complaining about passengers to other passengers, and picking random people, like me, to harass. She made me ride from Delaware to Philadelphia with a folding chair, carry-on, and sleeping bag ( which was neither comfortable or safe) because she thought I had something in my bag that would break. Nevermind this was the fourth Greyhound bus I had been on that weekend or that I offered to open the bags to show there was nothing breakable inside.

But I’ve digressed. Greyhound did what it was supposed to do which get me to my location. It just did so while reinforcing every bad thought I had about the company and justifying my reluctance to do business with them.

Overall, it was just a small setback in an otherwise very chill, friendly, and cool weekend filled with first-time and memorable experiences.