In “Meeting Corrie Ten Boom & Anne Frank” and “How a Smile Changed my Trip to Amsterdam“, I wrote about being inspired and rejuvenated in Amsterdam. While searching for new post material, I realized that there are lots of experiences and photos from Amsterdam I’ve yet to share.

The Truth About the Drugs…

Everyone knows  drug like marijuana are legal in Amsterdam.While the smell of weed does seem to follow you around the city, I learned during a tour that only soft drugs are tolerated ( there are serious fines and punishments for those found with anything stronger than cannabis infused  sweets and coffee).

And About the Red Light District…

No matter what feelings the word “prostitution” evoke, here it is  a legal and protected form of employment. The hope is that by getting the government involved, it’ll be harder for women to be forced into the business or abused once they choose this job. And of course, the government gets a piece of the profits as well. A tour through the Red Light Districts taught me that workers are required to fill out tax forms and must submit to regular testing for sexually transmitted diseases.

As the tour groups moved through the twisting alleyways ,there were  more and more lingerie-clad woman propped in the glass windows and drenched in the infamous red lights that drown out their imperfections. Most of them drape curtains over the windows when they see the groups coming.They don’t want tourists blocking the streets while they hold cameras up to their the glass and snapping away.Our guide also told us about the various securities systems the women use to protect themselves. If there’s no security guard, there’s normally a call button of some kind that can be pressed in an emergency. As many of the buildings are interconnected, it only takes a second for co-workers to arrive on the scene. And for those who blatantly ignore the no-photo rule, the women take things into their own hands by keeping buckets of waste,urine, and other things within throwing distance.

The guide also took us pass the many theaters and shops of the red light districts. The displays are intriguing and — at first glance –blush inducing. But after walking through the Red Light District everyday on the way to my hostel,I barely noticed anything odd about them. And in the words of our guides, “It’s part of life, right? Why hide it?” 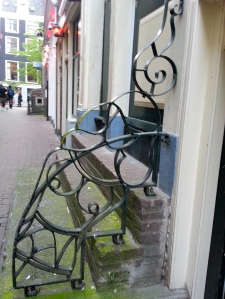 Hidden images are everywhere…can you make out this one?

You could say this about any major city but there’s something about all the museums and galleries in Amsterdam. There’s a whole area of the city dedicated to the best of the best called Musuemplein. The Van Gogh Musuem, The Rijksmuseum, and the famous I Am Amsterdam sign can all be found here. While I didn’t take the time to browse the insides, the outside parks were manicured enough to be considered art themselves. 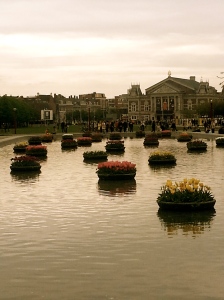 Thoughts? I like this one but there’s something funny about it too..

The Canals are beautiful…and full of bikes 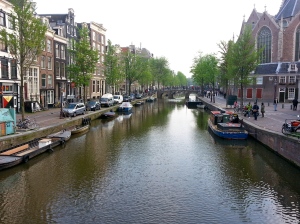 Somehow, thousands of bikes end up in the canals every year.

The Food  is Yummy

I don’t remember the name of the rolled meat patty–just that it was spelled with 13 letters and was tasty.

I might have over indulged in the French Fries– or Patat as they’re known here– and mayonnaise. I’m normally not a fan of the white stuff but it tasted sweet here and not at all bland or oily. I found the most delicious meal while lost in Haarlem. I ducked into a corner shop for directions and decided to wait out the down pour with a meal. The directions weren’t very helpful but the food was amazing. 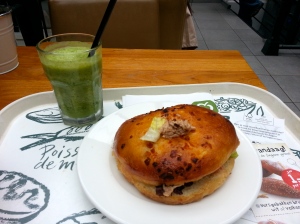 There’s something for everyone to do, tons of free tours, and lots of relaxed people strolling–or rather biking–around.

3 thoughts on “Snapshots: Amsterdam & The Red Light District (And the FOOD!)”

ready for the next destination