After an overnight journey on a cramped bus, I didn’t want to do anything but shower and sleep when I arrived in LA. But seeing as how my hostel has a strict no early check-in policy, I had no options … END_OF_DOCUMENT_TOKEN_TO_BE_REPLACED

While planning a trip to the West Coast for a prearranged conference, I wanted to do LA. I knew the city was expensive and after a few hours of research , I thought it was completely out of my budget. … END_OF_DOCUMENT_TOKEN_TO_BE_REPLACED

I started November by attending my first writer’s conference in Marin County, CA. As the event was only 20 miles ( or a half hour by ferry) to San Francisco , I knew I couldn’t miss the opportunity. So after … END_OF_DOCUMENT_TOKEN_TO_BE_REPLACED

After visiting Salem, I spent the rest of the afternoon and a chunk of the next day exploring Boston. It was my first time in the city and I wanted to see all the historic sites I learned about in … END_OF_DOCUMENT_TOKEN_TO_BE_REPLACED

Every Halloween enthusiast dreams of visiting Salem. Despite the dark history of hangings and witchcraft accusations, the tiny town offers a host of museums, reenactments, and memorials that attracts scores of people year round. Of course, the number of visitors … END_OF_DOCUMENT_TOKEN_TO_BE_REPLACED

Many people know Eastern State Penitentiary is a former maximum-security prison where the likes of Al  Capone were once imprisoned. A lesser known fact is that every year during the Halloween season, the prison turns into the haunted attraction called Terror Behind the Walls, complete with bloody zombies,psychedelic hallways, and menacing, glossy-eyed guards.

The frights start before you enter. Pale guards with slashed faces usher you through the lines, often yelling or lunging at the distracted for scares. After you sign a waiver and pose for zombie pictures, you’re given the option to intensify the experience wearing by an interactive necklace ( a glow stick) that allows the costumed actors to grab you, separate you from your group, or even drag you into secret, scarier tunnels. You’ll  have to make your way through six attractions– like the infirmary, the cells, and the machine shops– all while dodging the various ghosts, creatures , and madmen that dart out of the shadows.

My favorite  parts of the evening included  walking down a dark hallway of cells while dead prisoners chased us from the other side of the bars and going through a 3D room splattered with neon colors. I also enjoyed the last attractions, where guests walk through a narrow hallways as a billowing black mass of air presses at them from both sides.

Being a risk-taker, I chose the glow stick. I’m also a coward so I tended to grab my friend and run whenever I was being cornered and , thus, never got to experience the secret tunnels. I did witness several people emerging from these tunnels. One boy screamed, “You do not want to know what just happened!”. This, of course, made me wish I did know what just happened, so if you ever get the chance ,  take the opportunity to explore these secret passageways.

While it’s forbidden to take pictures while in the actual attraction, there’s a reception area outside that houses a few of the original cells and some display areas in route to the exit that make perfect photo ops. 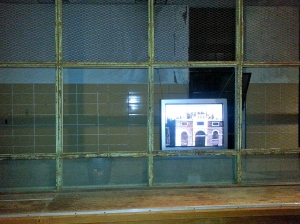 For more information on Eastern State Penitentiary,and the Terror Behind the Walls haunted , visit their easternstate.org.

Coupons for the attraction can be found at Lukoil gas stations.

Halloween has always been my favorite holiday. In fact, scary movie marathons,bite-sized chocolates,and pumpkin drinks are the only things that stop me from mourning the end of summer. Because of this, I decided to enjoy this month by visiting some … END_OF_DOCUMENT_TOKEN_TO_BE_REPLACED

ready for the next destination