Story time: My first international trip was a family reunion abroad a cruise ship to Mexico. At one of the ports ,  me and a few cousins decided to go horseback riding. Our guide led us into a small town … END_OF_DOCUMENT_TOKEN_TO_BE_REPLACED

After visiting Salem, I spent the rest of the afternoon and a chunk of the next day exploring Boston. It was my first time in the city and I wanted to see all the historic sites I learned about in … END_OF_DOCUMENT_TOKEN_TO_BE_REPLACED

My days in Korea are filled with school, Skype sessions home, and more school. So, I was very much looking forward to a week of new sites and experiences. Luckily, if there is any word to describe my time in China, it would be new. Completely novel,unique, unfamiliar and – at times – baffling.

In eight days I saw four different cities, took a flight, and spent a night on a  train in the countryside. It would be impossible to share every moment so I’ll settle for recounting my most memorable parts of the trip in a new series called The Best of China. There will be a new post about my trip every week in August.

On my second morning in China, I set out for the The Great Wall. After a two-hour ride from the center of Beijing, the bus pulled into a parking lot. It was pretty unremarkable at first; just concrete,a few dozen venders setting up their stalls, and a Subway restaurant.

Then I looked up. Through the fog, I could just make out the famous fortress.

Can you see it?

That’s when it hit me. I was actually going to climb the Great Wall.

Despite others telling me I would miss out on the “authentic” experience , I bypassed the hour-long hike and took a scenic cable-car ride to the top of the wall. As I reached the platform,  two Chinese men leisurely standing around  began gesturing wildly. “Sit! Sit!”, they yelled. I looked around clueless and then saw the cable car quickly making its way towards me. I sat-or rather, fell-into the seat just in time. The safety harnessed snapped into place and in seconds, I was flying over lush, dense forestry and getting closer and closer to the wall. Now I could just make out the watchtowers and the sparse Chinese flags placed randomly around them.

Finally, I was there. My feet were planted firmly on the ancient Great Wall. Fortunately, there was still plenty of  it left to climb. Even after reaching the top, it was a strenuous walk up and down the jagged stone steps and many watchtowers. Even though it was overcast and there was a nice breeze, I still ended up drenched in sweat. Some areas were crumbling and others were well -preserved but all of it was steep.  So steep that women kicked off their heels and sandals and it wasn’t unusual to see people on all fours. 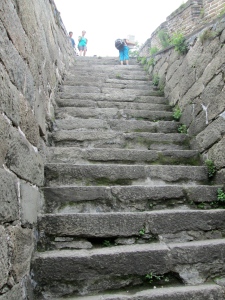 Stairs of the Great Wall

Most impressive were the venders, who trekked to the highest peaks with pounds of food and souvenirs strapped to their back.  I got the chance to speak to one of the venders , an older women who kept removing her glasses to wipe the sweat off her brow. She motioned to one side of the wall and , said “Mongolia” and pointing to the other side said , “China.”  Finally, she pointed to herself and proudly said “Me…Mongolia. Two hours.” She ran two fingers across her hand to mimic walking. This woman was telling me she walked two hours  just to get to the Great Wall. That’s not even counting the time  and effort it took her to climb up the wall. “Everyday?”, I asked her while handing her 10 yuan for some water and a photo she took of me. She handed me my camera and still smiling, just nodded. “Everyday.”

One of the many vendors

The trek wasn’t all bad of course. If you took a minute to pause and look around you , there were views like these: 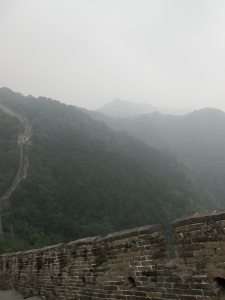 After three hours of  wandering, I raced a Toboggan back down. The six-minute ride offered the perfect opportunity to  reflect on the history I just experienced and marvel at the beauty of this place one last time. I closed my eyes; tried to imagine what it would have been like to build this wall. Or to be one of its watchful soldiers, running up and down the twisting stairs multiple times a day.

And yeah, I’ll admit it – I was singing the Mulan soundtrack in my head.